HomePublicationsHeroismBattle of Kursk: demolishing the myth

Battle of Kursk: demolishing the myth

A photo album called "The Battle of Kursk 1943. The View through the Camera Lens" was published in UK.

Valeriy Zamulin, the author of the book is a professional military historian. He has been collecting documents pertaining to the history of the Battle of Kursk and the fighting at Prokhorovka over 20 years. However, his interest in this matter started much earlier. When he was a schoolboy he managed to build a collection of over 1,200 items related to the Fire Bulge: stories of veterans, books, newspaper clips, military accoutrements found on the former battlefields, as well as armour parts, shells and other artefacts. Valeriy headed research work in Prokhorovka Field Museum-Reserve that is near Belgorod for 13 years.

"Everything connected with the Battle of Kursk is very close to me because this is the history of my homeland and family," he says. "My father's father Foma Zamulin who had been the chief of collective farm Krasny Mayak in Prokhorovsky districts before the war was drafted into the Red Army, participated in the battle for Moscow, was the commander of an anti-armour squad of the 150th Armour Brigade of the 20th Tank Corps during the battle of Kursk. He was killed in November 1943."

Zamulin spent a lot of time doing a research work in archives of Russia and abroad, including the Central Archives of the Ministry of Defence of Russia and the U.S. National Archives. Valeriy participated in making a number of documentaries and TV programs for Russian Federal channels, and several radio programs dedicated to the history of the Battle of Kursk and its engagements. He is the author of over 60 publications in Russian and in English. From 2006 to 2009, АSТ and Eksmo publishing houses released a number of his books about the war times. 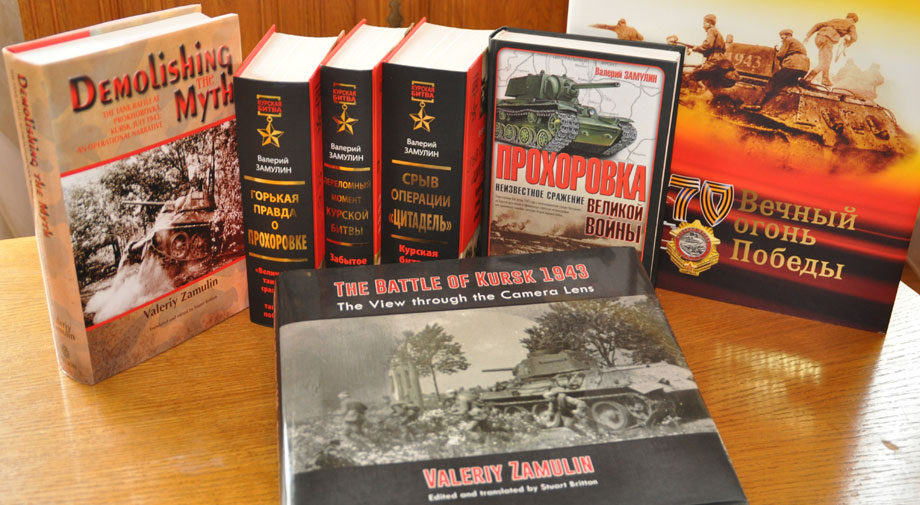 In 2011, a monograph by Valeriy Zamulin for English-speaking readers was published in the UK. It’s called «DEMOLISHING THE MYTH. The tank battle at Prokhorovka, Kursk, July 1943: an operational narrative». The book based on previously unknown Russian and captured archive sources and recollections of the participants of the Fire Bulge events went through several editions in the West. "Professional military translator from the USA Stewart Briton who had translated into English a number of books about the Great Patriotic War by Russian authors, encountered my works in the Internet and offered to translate them for Helion & Company publishers," Valeriy tells us how the cooperation began. "Later, they proposed to publish a photo album about the Battle of Kursk, which, by the by, has not been released in Russia yet."

The new book consisting of almost 500 pages includes over 600 photos, as well as maps, historical essays about the formation of the Kursk salient, about preparation of the opposing forces for combat operations in the summer of 1943 and, finally, about the defeat of the German army near Kursk. Over 150 historical personages, with commentaries for each, are depicted in the album. The edition features the best and at the same time little-known pictures of the following leading Soviet war correspondents that covered the Battle of Kursk: Victor Kinelovskiy, Feodor Kislov, Galina Sanko, Natalia Bode, Eugene Kopyt, Ilya Ozerskiy, Oleg Knorring and other outstanding photo journalists. There are a significant number of pictures taken during the freeing of Kursk from occupants in February 1943 and combat operations on the northern face of the Kursk Bulge in July 1943.

The main author's goal was to present the view of Russians of this grandiose event to the western readers therefore Soviet photographs comprise the bulk of the book. It also includes a significant number of captured German photographs, as well as aerial reconnaissance photographs taken in the spring and summer of 1943. All of this invaluable material was found in the stocks of 11 Russian and foreign archives and museums, as well as in the family collections of the war veterans.

"This approach gives western readers a more objective image of those historical events,” Valeriy Zamulin muses. "The German-American view of this critical battle of WWII has prevailed abroad. Up to now, Europeans and Americans have viewed the fighting near Kursk through the eyes of SS propaganda formations whose photographs have been widely used by the western authors."

< The Soldiers of World War II: Petr Eremin
A Dive into a Dream >