Walking on a Riverbank: the Seym River

A series of travel essays "Walking on a Riverbank" describes how fascinating hiking trips along Russian rivers can be. We will start from a two-day trip along the Seym River in Kursk region. 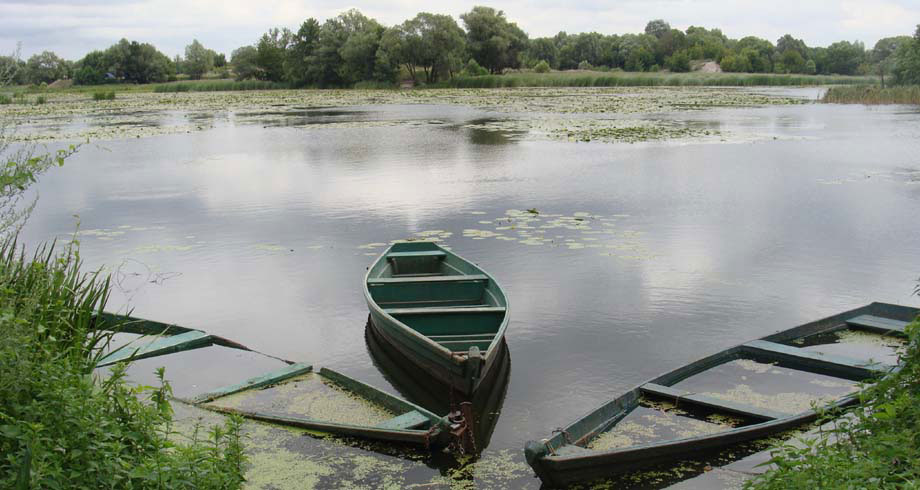 It is possible to walk down to the Black Sea along the Seym River. But with only two days-off available, we will content ourselves with the "sea" of Kurchatov city: the cooling pond of Kursk NPP attracts very real seagulls and water is always warm there. It is not a destination that mattered, but process. Therefore, our route starts in Kursk's residential estate KZTZ early in the morning.

The terminus of tram route No.4 ends where a pine forest begins. After exhaust fumes of the city, the air saturated with pine aroma makes us feel slightly high. The place is awesome: the forest is favoured by squirrels, woodpeckers and people, of course. On passing two recreational camps, we find ourselves near a railway bridge across the Seym River. We walk strictly along the left bank. A country road that is even paved at places connects several recreation facilities. Where dogs start barking at you from under a wire mesh fence, it is better to turn to the trail that goes to the left otherwise there will be a dead end ahead anyway. We walk through an edge part of Kursk, namely, along Priseymskaya ("Near Seym") and Yasnaya ("Clear") streets, go down under a viaduct of the orbital Crimea Highway and wave good-bye to Kursk.

The most forested part of the route begins here. One minus is mosquitoes. The rest is a plus, including a short distance of about two kilometres. By the by, it is one of few places on the Seym River where Red Book white water lilies occur, while yellow spatterdocks are in abundance here and there. Fishermen helped us unknowingly: the tracks that they beaten near the bank are very useful – one path finishes, another begins. At some moment, the trail runs into the fenced area of a biological-manufacturing plant, but the plant's security guard turns out to be a good fellow. He is not against our brief intervention because he respects tourists and so on. When he hears of our destination he doubts at first if it is possible to get to Kurchatov by walking along the river. Then he ponders for some time. "For sure, there are trails leading to the water-treatment facilities," he said. But even farther that that, we hike without any problems. Meanwhile, landscapes change. Now there are meadows, backwaters and flood-plain lakes above which a couple of stray seagulls (amazingly here, not far from Kursk) circle together with bank swallows.

A Game of Dominoes?

Any trip, even such a short one, entails new acquaintances. The river meanders through several villages: Chernitsino, Lozovskoye and Malyutino. Sometimes we happen to ask local for directions or just strike a casual conversation with them. What makes us feel like not cool at all that locals do not see us as strangers – we do not catch a single wary look or a question like where we were from. No way. A dog snuggles up to us and bored Mikhail Ivanovitch sitting near his porch offers us a game of dominoes before we can say Jack Robinson! This takes no less than half an hour. Alex, a five-year-old kid, also takes us for locals when we pass by silently. "Goin' fishing?" he asks without preliminaries. "Don't leave without me!" he adds and looks with hope. We buy off with a chocolate bar and while the little fellow struggles with the package we shamefully back off.

We cross the road to the village of Pimenovo under a viaduct by the end of the day. Rain starts drizzling again. We are definitely unlucky with the weather but a raincoat solves the problem. We hear people sing at the edge of Vaninsky Forest. The place is frequented by Baptist Evangelists but now there is a Christian camp situated among pine trees. It is time to set up a tent and start a small bonfire on the riverbank. It is getting cold.

The Vorozhba River enters the Seym River. It can be crossed on the dam that must not be missed – it is easy to lose one's way here. That is why we need to listen carefully to the noise of falling water, so we head there.

We enter the village of Dichnya, a location that hosts an all-Russian amateur singer-songwriters' musical festival every year. So we pass the place until we reach summer camps. To the left, there will be seen an exit to a highway. Four more kilometres to go and here we are in Kurchatov. But easy rides are not for us and we turn to the right. After walking some 700 meters on the road paved with concrete slabs, there can be seen yellow pillars at a distance to the right. So, we have reached one of the main sights of the route.

This structure is worth seeing – a suspended over 100-meter long bridge across the Seym River. As far as we know it is the longest bridge in Kursk region. The height is breath-taking and it swings like hell. They say, the most courageous rural guys could ride a bicycle on the wooden flooring. It is difficult to believe this, but such is the story.

Then we walk past a summer community. We help ourselves to apples there, encounter a water spring just in time to replenish our water supply. From here on, the Seym riverbed becomes wider – it was expanded artificially. We detour Kurchatov along its border. Two more bridges are behind, we come to a third one and then head toward the "sea". 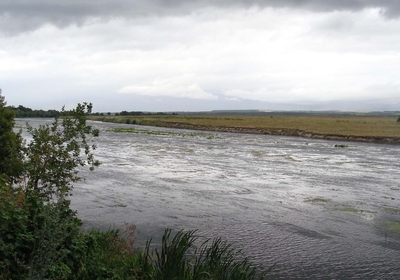 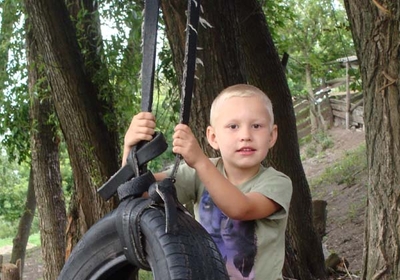 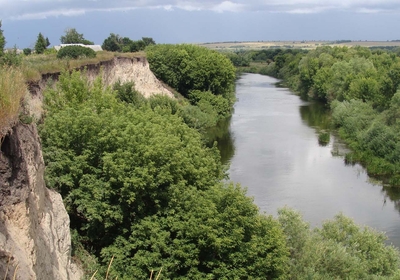 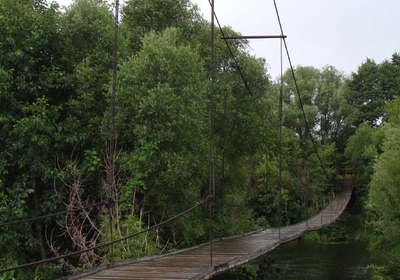 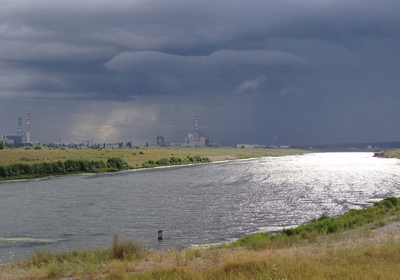